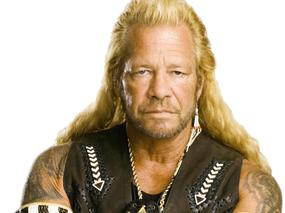 Considered the greatest bounty hunter in the world, Duane "Dog" Chapman has made more than 6,000 captures in his 27-year career. This highly intense, charismatic ex-con and born-again Christian is the king of the comebacks. This modern-day hero once served time in a Texas prison. "I am what rehabilitation stands for," Dog says.

Now on the right side of the law, Dog is tireless in his efforts to bring in the bad guys and encourage them to turn their lives around. Over the years, the list of fugitives Dog claims to have either helped catch or single-handedly brought to justice reads like a who's who of America's most wanted, including high-profile rapist and Max Factor heir, Andrew Luster.

Dog credits much of his success to his knack for getting the most out of his informants. "Seventy percent of all my captures happen because some good ol' American has turned them in by giving me information," he says.