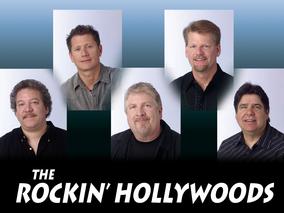 The Rockin’ Hollywoods present “Solid Gold Rock N Roll”  from the 1950’s thru 1980’s eras  with an energy and excitement that captives audiences of all ages.

Formed in 1973, the utilizes period costuming, very physical  choreography and staging, with great vocals  and musicianship, gaining them critical  and popular praise.

The Rockin’ Hollywoods have drawn  praise from the Beach Boys whom they opened for in 1990 and 1985,  and worked with other greats such as Rick Nelson, Bo Diddley, Del Shannon, Gary Puckett, Four Tops, Neil Sedaka and many others.

Their second album “Greaseland” was released in June of 1988. Produced by veteran songwriter, musician, James Walsh of the  “Gypsy Band”  the LP is a great collection of well known and a obscure songs as well. A third album, released in 1990, “Danceland” is also available.