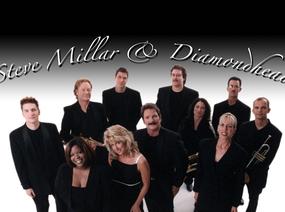 Steve Millar is a highly-acclaimed entertainer and producer based in Minnesota who offers both event planning and exciting entertainment options to enhance your next event.

Whether you experience his Dance Band, bringing you a show of diverse music and humor that will keep you dancing the night away, or his Show Band's Show Productions, built around a tailored mix of musical themes, Steve works with the finest musicians based out of the Twin Cities area.

And Steve Millar and Diamondhead are not simply a group of exceptionally talented musicians—they also have what only can be described as a "magic" about them. They all but instantly involve an audience, and carry them through a powerful musical performance sprinkled with a kind of "natural" humor and wit that could only come from people who are thoroughly enjoying what they do.

Whether the event is a corporate party, wedding, reception, street dance, summer festival, or fund raiser, the band is available to play "fly out" dates anywhere in the world.

Currently a recording artist and producer for Excelsior Records, Steve has also recorded for Pickwick Records.

Additionally, Steve is a producer and Emcee host for talent shows at Grand Casino, Jackpot Junction, St. Croix, Mystic Lake, and Treasure Island casinos. Through his company, Diamondhead Productions, Steve offers other musical services for his clients, including contracting and booking with other musicians and musical acts.