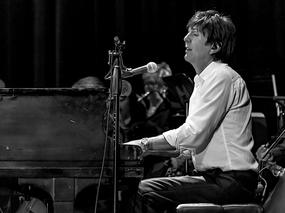 Singer and Recording artist, Tony Kishman is the creator and band leader of “Live And Let Die”; a full multimedia experience celebrating the music of Paul McCartney and featuring an amazing line-up of world class musicians.

Tony starred for six years in both the national and international tours of Broadway’s smash hit musical, ‘Beatlemania’ and also performs in the International Symphonic Beatles production, ‘Classical Mystery Tour’.

He has been performing his award winning show to the most successful band of all time around the globe for more than a decade, bringing the music and the magic of both the Beatles and Paul McCartney to a new generation, earning raves by ‘Beatlemaniacs’ for his uncanny resemblance both visually and vocally to the beloved Beatle.

A consummate musician and multi-instrumentalist, Tony Kishman had previously performed, recorded and toured with the critically acclaimed band Wishbone Ash and recorded his own music with both RCA and Mercury Records – ?He is also proudly endorsed by Hofner.