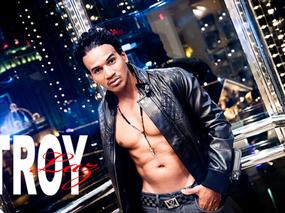 A stellar performer and world sex symbol takes sexy back and modernizes R&B, Funk, Hip-Hop & Rock. He works with talented musicians and formed a Band on New Orleans “world-famous” Canal Street and toured as lead singer for a number of years across the United States and overseas. The band’s popularity skyrocketed to awe-inspiring heights building a huge following in the crescent city and surrounding areas. Fourth Of July Week come check out Troy Laz Band at Gold Strike Casino Tunica, MS Troy “Lazerus” Powell was determined to make it! Plagued by living the “hard knock life” while growing up in the Lafitte Housing Projects of New Orleans, he made a decision to be successful by choosing not to succumb to a life of crime in the city streets. As a result, Lazerus used those same streets as a means for gathering with his neighborhood friends to showcase their talents to generate income. He banded with some talented musicians from the areas and formed “High Quality Band”. He toured with the band as the lead singer for a number of years, across the United States and overseas. “High Quality Band” popularity skyrocketed to awe-inspiring heights building a huge following in the metro area of New Orleans. Subsequent to performing at a key local event, a promoter presented an offer to Lazerus for “High Quality Band” to be an opening act for a number of major recording artist as the likes of Toni Braxton, Run DMC, John B., All For One, and the late Gerald Levert. Although Lazerus did not sign a major record deal during the time, he received recognition for his “A-Rated” shows and numerous propositions to sign a recording contract as a solo artist, which he rejected because he did not want to split up the band. Lazerus and High Quality Band were highly sought after by Canada’s largest booking agency, S.L. Feldman & Associates to head-line as an opening R&B act in Canada where they remained for several years selling out tours every single week. Currently, Lazerus performs as a solo-artist with his band “2Hipnotic” at colleges and universities across the United States. He also performs at some of the hottest clubs around the country such as Hard Rock Hotel and Casino in Biloxi, Mississippi and the Republic in New Orleans. In addition to singing, Lazerus speaks fluent Chinese and Indonesian languages.