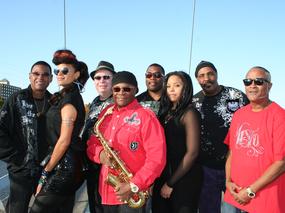 FINAL MIX serves up the latest in R&B, Jazz Fusion, Blues, Hip Hop, Rock & Roll and original material. The leader and songwriter of the group is DEL "SAXMAN" JONES. For Del, blowing smooth sounds from his saxophone is as natural as his heartbeat. After many years of playing his soprano, alto and tenor saxophones, this internationally acclaimed musician and front man of FINAL MIX is taking the band's sounds and high-energy performance around the world. FINAL MIX’s story began in Seattle, Washington in 1989, where some of its members were originally part of another band called the C.C. Ryders. The C.C. Ryders performed at the world-class Grand Hyatt Hong Kong Hotel for the grand opening of JJ's nightclub, which soon became the crown jewel of Hyatt's flagship entertainment center. It became one of the most popular stops in all of Hong Kong. C.C. Ryders took their familiar blend of nostalgic American R&B, Funk and Rock & Roll across Asia (to Bangkok, Singapore, Taipei, Japan, Guam and Indonesia—just to name a few), and around the world. They drew entertainers, dignitaries and celebrities (including Kenny G, Whitney Houston, Bobby Brown, Jean-Claude Van Damme, Naomi Campbell and even Prince Charles and the late Princess Diana). The band's popularity led to their 1994 release of "Live at JJ's" on the BMG International label. In 1999, FINAL MIX, a well-polished and respected act, became the newest reincarnation for Del "Saxman" Jones. FINAL MIX has performed on Carnival Cruise Lines for several months, touring from New York to the Caribbean. They have entertained the sophisticated crowds of Naples, Florida, and rocked the house at popular Mississippi casinos. They have excited crowds all across the country with their energetic shows—from the east coast to Minnesota, from Colorado to South Dakota—even Las Vegas. FINAL MIX has also entertained fans internationally, in such hot spots as Switzerland, Paris and London. They have performed with big names in the industry such as Al Green, The Commodores, Chubby Checker, Buddy Guy, Delbert McClinton, Neal Sadaka and many more. Saxman received the honor of being inducted in the Blues Hall Of Fame of his native state of Iowa. This really validates his exceptional talent. FINAL MIX is always on top of the hottest hits and stays up-to-date with the latest demands of the market—from corporate gatherings, weddings, parties and casinos to nightclubs. FINAL MIX shows are a visual treat—the band's unique and distinctive choreographed style accents their top-notch musical talent