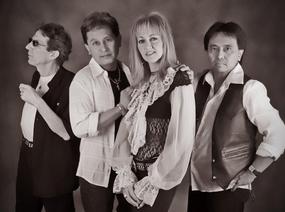 Ron is the leader, keyboard/guitarist and one of the three lead vocalists for the group PASSION. As a young teen the California keyboard phenom joined a San Francisco bay area R&B/Funk band. It is with this band that he began songwriting and arranging music. They released their first three singles on an Indy label getting heavy airplay in the bay area and reaching interested ears in Los Angeles. This led to his arranging the music for an album by a Grammy Award winning Gospel group followed by a multi-million dollar major label recording contract for his young band with Capitol Records. The youngsters recorded and released their first album which charted on the Billboard Hot 100, and experienced some minor national and international success. After this very promising start, a few national tours with major artists, some international touring, significant radio airplay for their singles releases, national television appearances, and soon after recording most of their never-released second album the group disbanded in Las Vegas, Nevada. This was very disheartening because he was the primary songwriter for the band. Shortly afterward he accepted a keyboardist position with another band and toured the country for the next few years while also doing recording session work in Los Angeles, New York, Boston, Connecticut, the San Francisco bay area and Las Vegas, eventually making "second home" Las Vegas, his primary residence. A few years later he formed and started touring the country with his new group PASSION. Years later, after hearing some of the new songs he had written and recorded with PASSION, Capitol Records again offered him another record deal but he and the label were never able to agree on terms. He is currently writing and recording new material for their upcoming album.

At age seventeen super talented keyboardist/bass guitarist/vocalist Al left home and headed for New York City. He worked at several clubs performing with local bands before joining a nationally touring group based from there. After several years of success, somehow, he too also finally ended up in Las Vegas. After making the desert oasis his home he was once again bitten by the road bug and hit the road performing with and being the musical director of several other touring bands including a major "Las Vegas Strip" headliner. His travels extended throughout the continental USA, Alaska and Hawaii. After several more tours he decided to stop the traveling altogether in order to continue his formal music education at the renowned Grove School of Music located in the Los Angeles area, adding film and television scoring, orchestral arranging and conducting, and jazz improvisation to his burgeoning musical repertoire. After graduating from school he returned to Las Vegas and eventually back on the road again. He was performing at a major casino in Atlantic City, New Jersey, when brother Ron called with an invitation to join his group. He was enthused about working with his brother again (they first played together in a high-school rock band) and when the engagement in Atlantic City was over he left to join PASSION. He continues his personal musical growth with his continued jazz improvisation studies and performances.

The dynamic front person extraordinaire of PASSION and one of the nation's most soulful, exciting, energetic and outstanding vocalist/entertainers is Sarah Linn. Her ability to soar with her extended vocal range and move from one genre of music to another effortlessly and authentically has awed and amazed audiences nationwide. Sarah is a native southeast Ohioan born and raised in small town Waterford, on the dairy farm her family owns and operates. Her talent to sing was cultivated in church and at family gatherings. She also plays the keyboards and guitar with the group. Sarah performed with a local rock group while attending college first at the Franciscan University of Steubenville in Steubenville, Ohio, and later at Ohio State University in Columbus, Ohio. She graduated with a degree in Mathematics from Ohio State University and during that same summer met and joined the group PASSION. She now resides with her husband Tom in the Great Lakes city of Marquette, which is located in the upper peninsula of Michigan (the UP) and on the sparkling shores of cold but beautiful Lake Superior. In her spare time she performs singing and playing guitar at local church functions.

On the drums and born and bred in the east coast city of Baltimore, Maryland is dynamo drummer Tim. He started laying his first grooves at age eleven on a collection of metal trash cans which eventually led to a real drum kit. He began playing in music groups throughout high-school in addition to taking private lessons on the drums, the trumpet and the piano. His superior drum skills eventually led to studio session work with Grammy award winning engineer/producer George Massenburg. After years of studio work it was on to tours with several groups before returning to continue his musical studies in the Baltimore/Washington D.C. area learning jazz and improvisation. Then it was on to Western Europe and the Virgin Islands touring with numerous international artists. He returned once again to the D.C. area where he worked as Assistant Stage Manager for DAR Constitution Hall. The drums began calling again and before long he left his job to hit the road performing with several groups in the western half of the United States before getting a call from and finally joining PASSION. A very well schooled and talented drummer he made his reputation playing on acoustic kits but he has never been intimidated by progress or technology and embraced the use of electronic drums long ago thinking of them as another instrument and style of playing to be mastered.